What miracles a little hot water and fabric softener can do...

Doll hairstyling, to be honest, was never my strong point as a kid. I wasn't massively interested in brushing their hair for hours on end - far too many interesting adventures and games to play! So when it came to styling 'rescue’ Barbie hair and making it look well-cared for and beautiful again, I didn't rally know much about hair restoration. Looking at re-rooting pages made me wince, so I ignored those and concentrated on simply restoring and re-styling hair.


As you can see from the reference pictures, Christine’s hair is quite something! The actual wigs used in the performances have to be restyled after every show, so it's a labor-intensive hairstyles. As you can see from these screen caps of the lovely Sierra Boggess from the 25th anniversary concert, some of these curls are already dropping in the second picture below!
It varies in productions across the world with subtle differences. Some wigs have a more pronounced styling at the back, some curls are more frizzy, others are smooth. But it’s nearly always gorgeous brown waist-length ringlets cascading down her back, with two pieces pulled back.
Perhaps my favourite version (for sheer silliness) is one Phantom fans have named the 'Mickey Mouse' do, where the hair at the top of the head almost becomes two 'mouse' ears

Making the hairdo in miniature

My first actual problem was the curls themselves. I looked up tutorials online, and the one I found most useful for getting Christine's highly sculpted curls was this very useful guide on getting ringlets for ‘Masquerade’ Sindy’ here at http://www.mysindy.com/enter/. This gave me the right idea for achieving the look I wanted, and had a very helpful step by step guide! I took photos of my own process as I went along, just to remind myself of what I did: 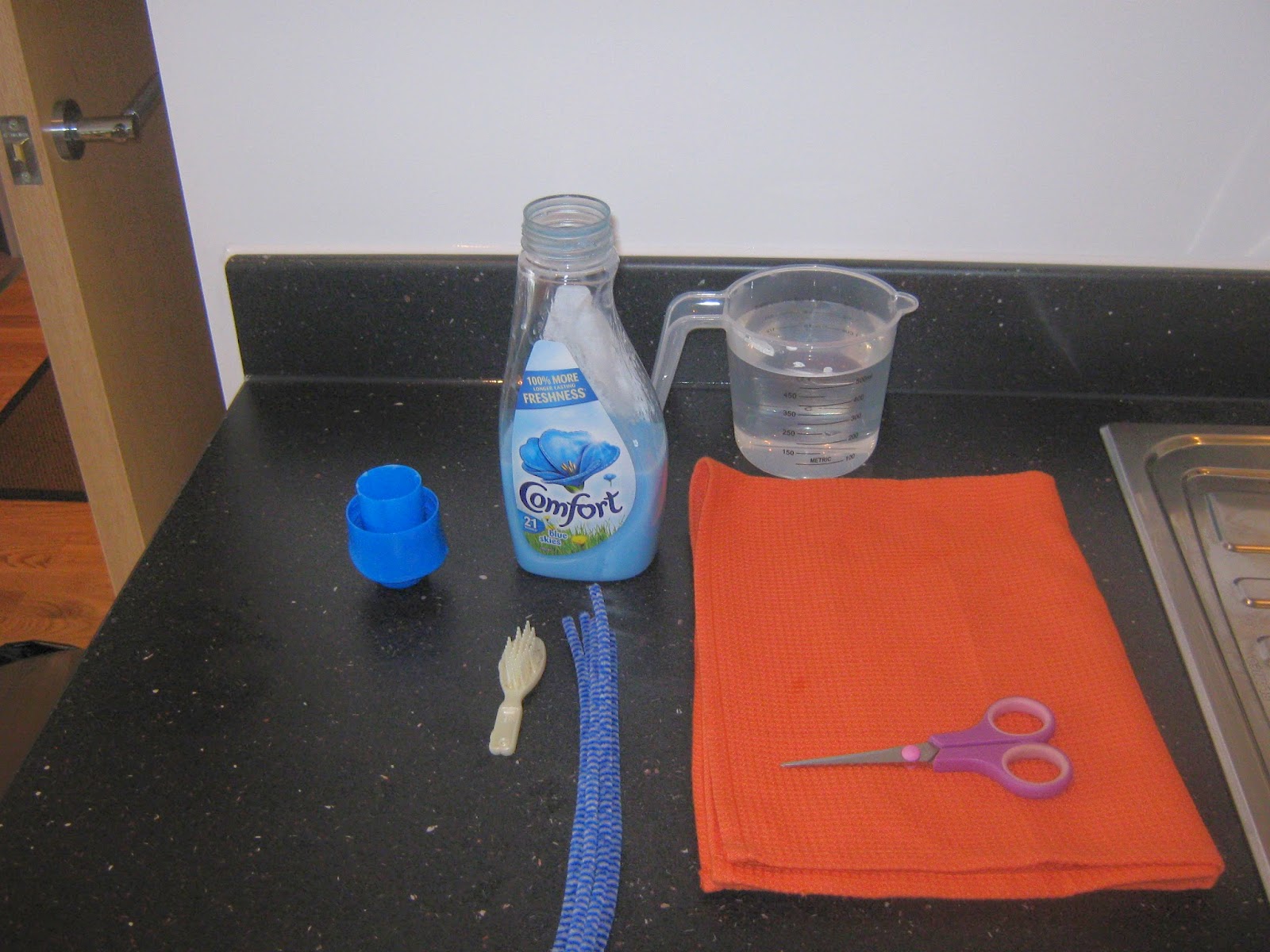 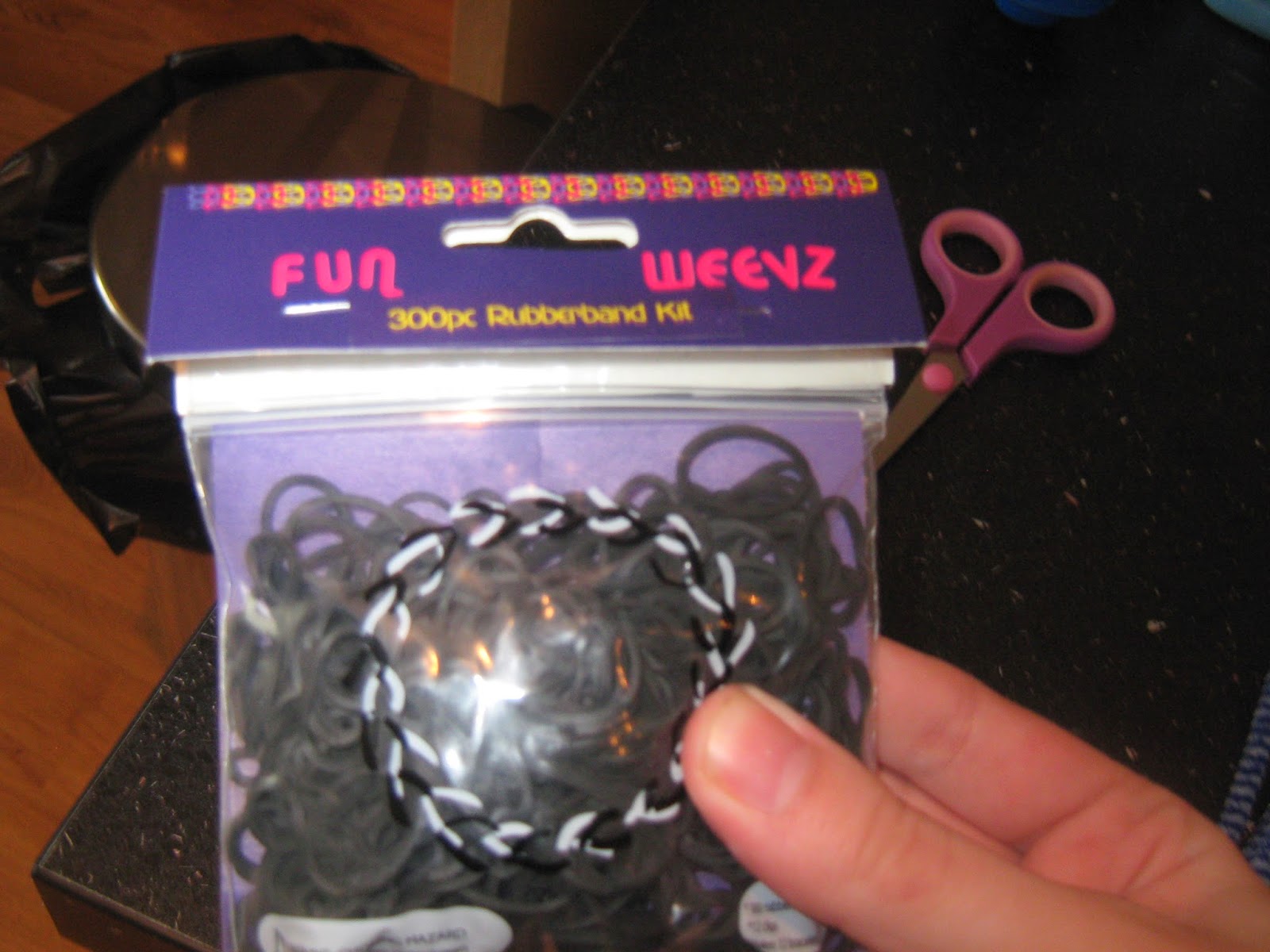 I used warm (and later on, boiling) water, some basic fabric conditioner - a magical secret ingredient where styling and unsnarling doll hair is concerned! And some pipe-cleaners to do duty as curlers or perming rods, along with a doll brush for styling. I used the wonderful salon atmosphere of my kitchen sideboard for my 'styling area.' I also got my hands on some of these very useful little things - miniature rubber bands! I found these in Claire's Accessories. They're the tiny rubber bands called Fun Weevs that people use for making bracelets, but they're just the right size for doll bobbles and are very useful for styling. They come in several different colours as well as clear, and are nice and cheap at £1.99 a packet. These were a super find for styling concerns as I didn't expect to find these outside a specialist hair-shop. 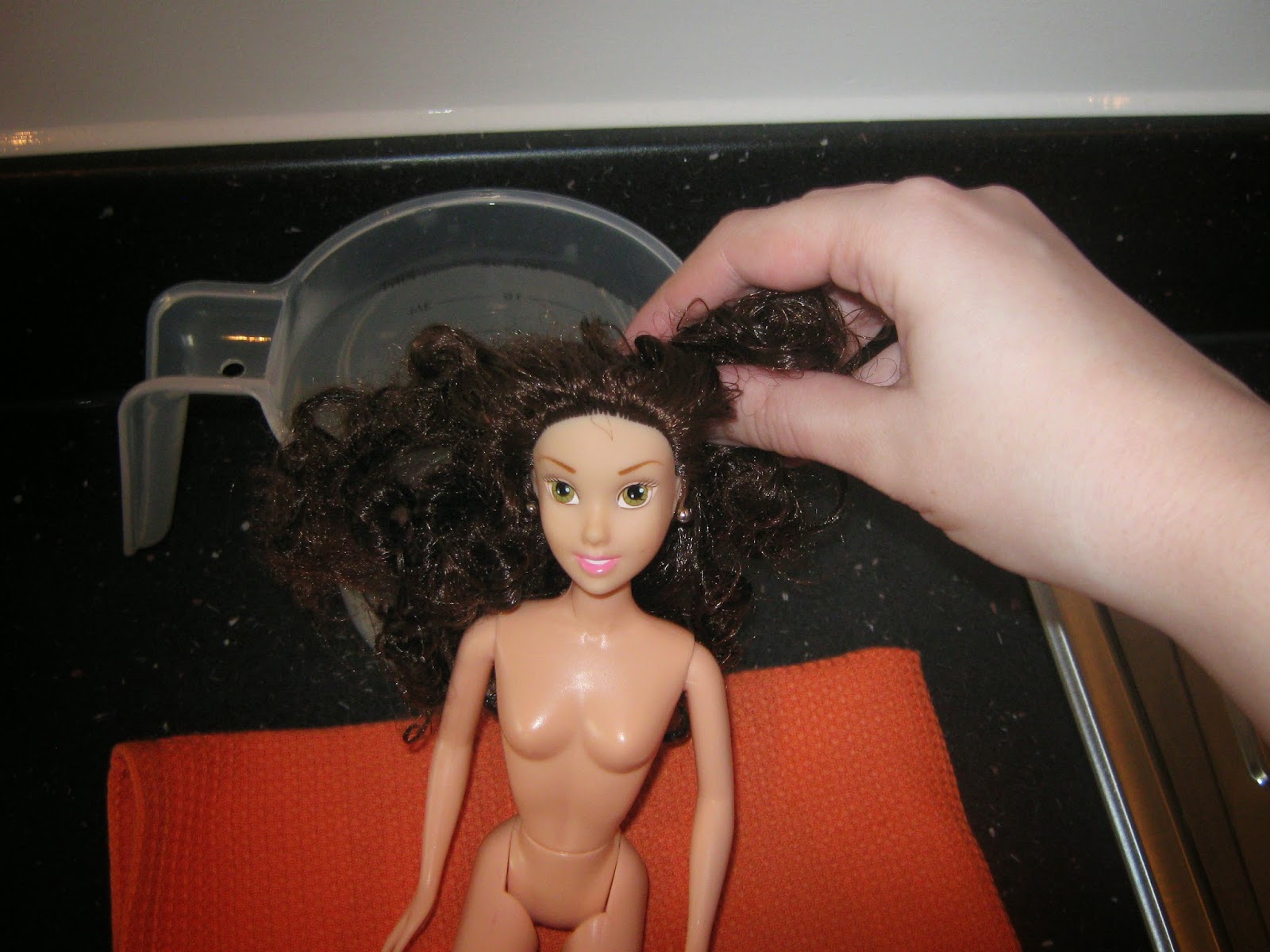 First of all I gently washed my Belle's hair to get rid of the snarls and dropped curls.I didn't use fixative the first time round to make sure the curls stayed in place, and they dropped - much like Sierra's - when I was taking measurements and fittings for the costume. So I had to give her a thorough few dunkings in warm water to make sure I'd got the old styling residue out. On an average 'played with' doll, this would probably take less.You need to make sure it's well soaked., and to brush out the snarls. 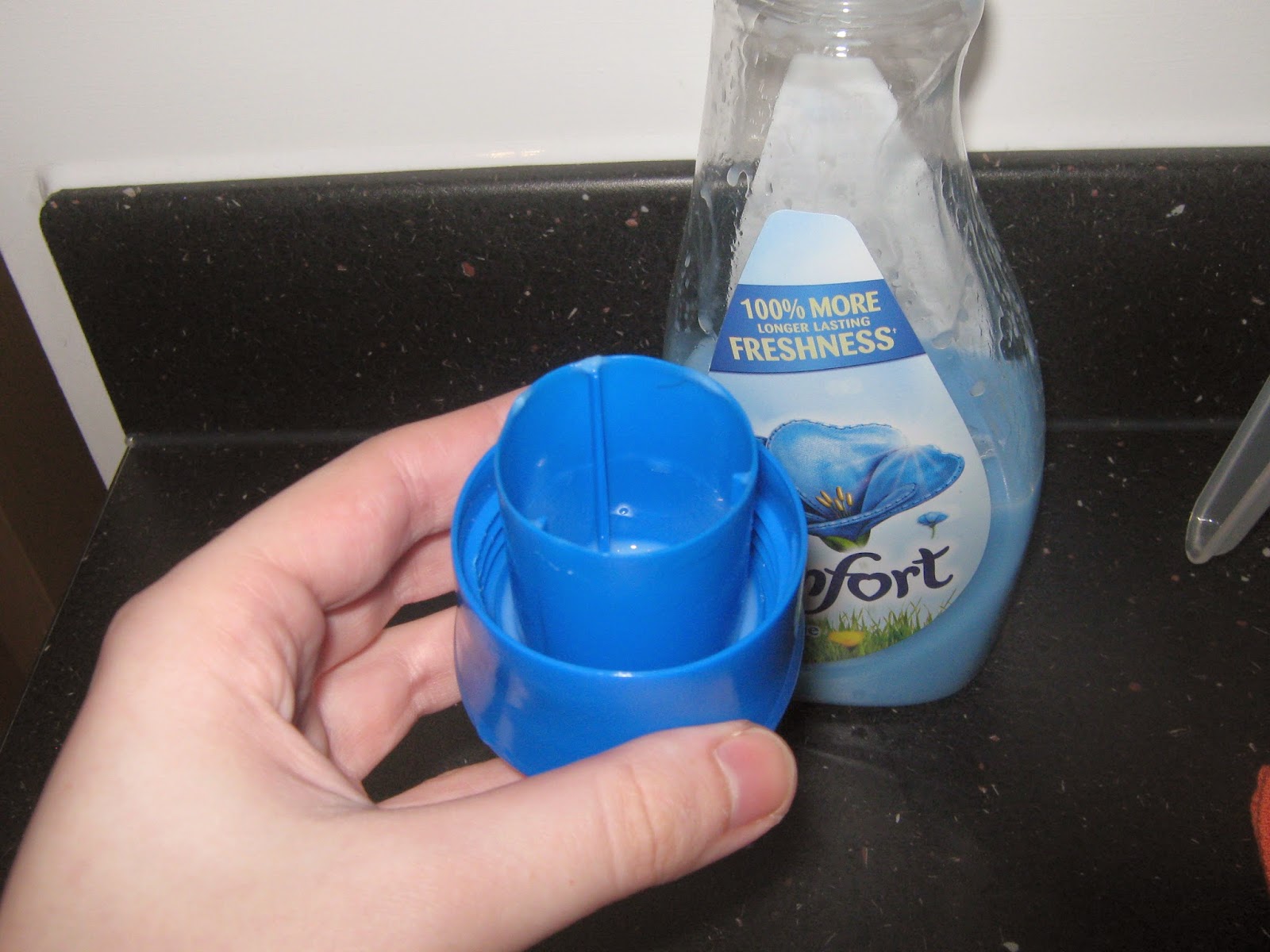 The Sindy tutorial recommended using wig shampoo, but I didn't manage to find any (and this project is supposed to be 'Christine on a Budget', after all!) So I simply rinsed it well, using a little washing up liquid, and once I thoroughly rinsed it a few times, I used fabric softener as a conditioner. 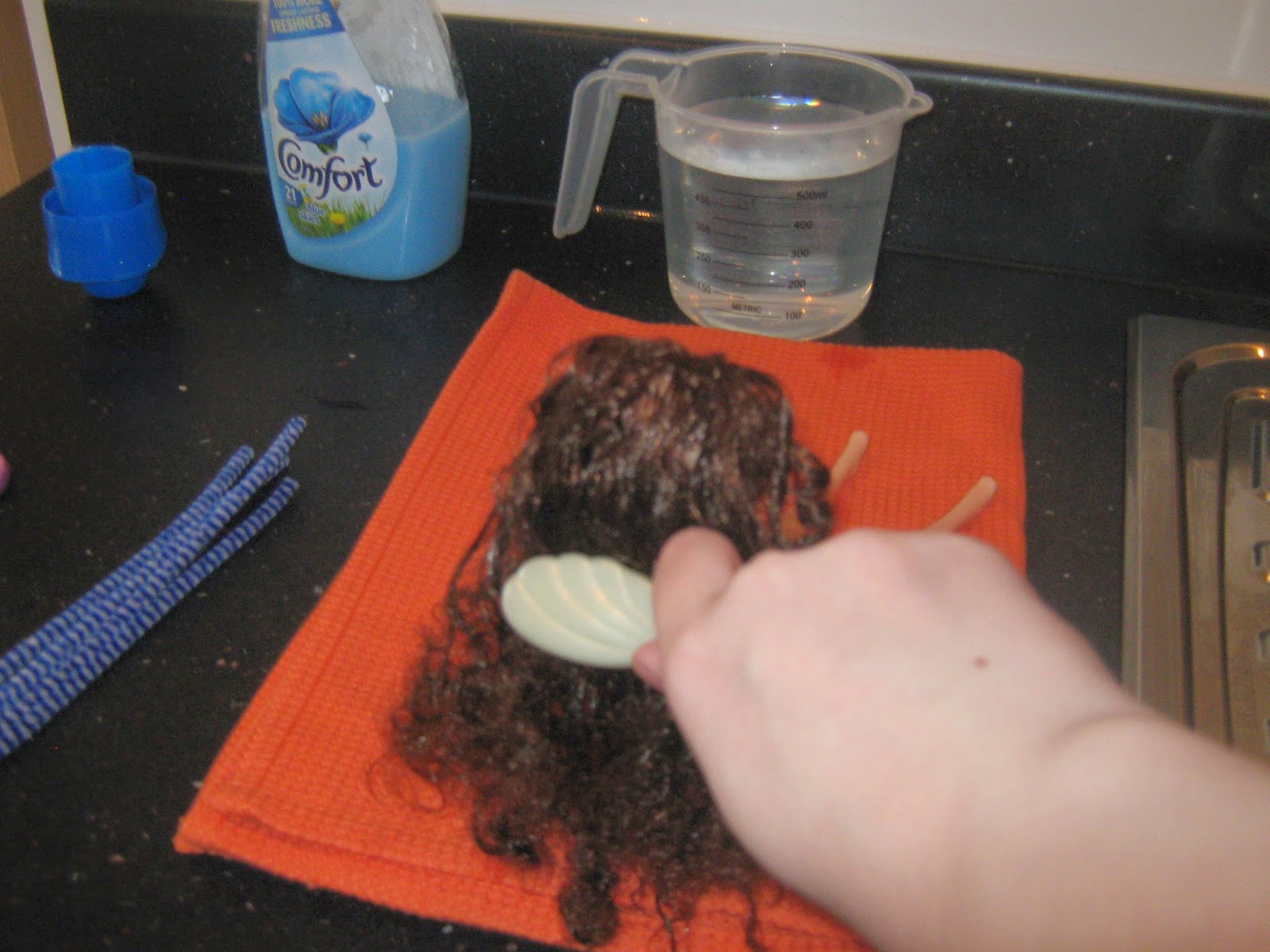 Then comes the brushing. A lot of brushing. Even having more patience than I did as a child, I found this took  easily over an hour to get out all the snarled hair the first time I styled Belle, simply from having been played with so much and then simply dropped back in a box. It was easier the second time. I found it easier to take it one section at a time and comb out any knots or tangles. 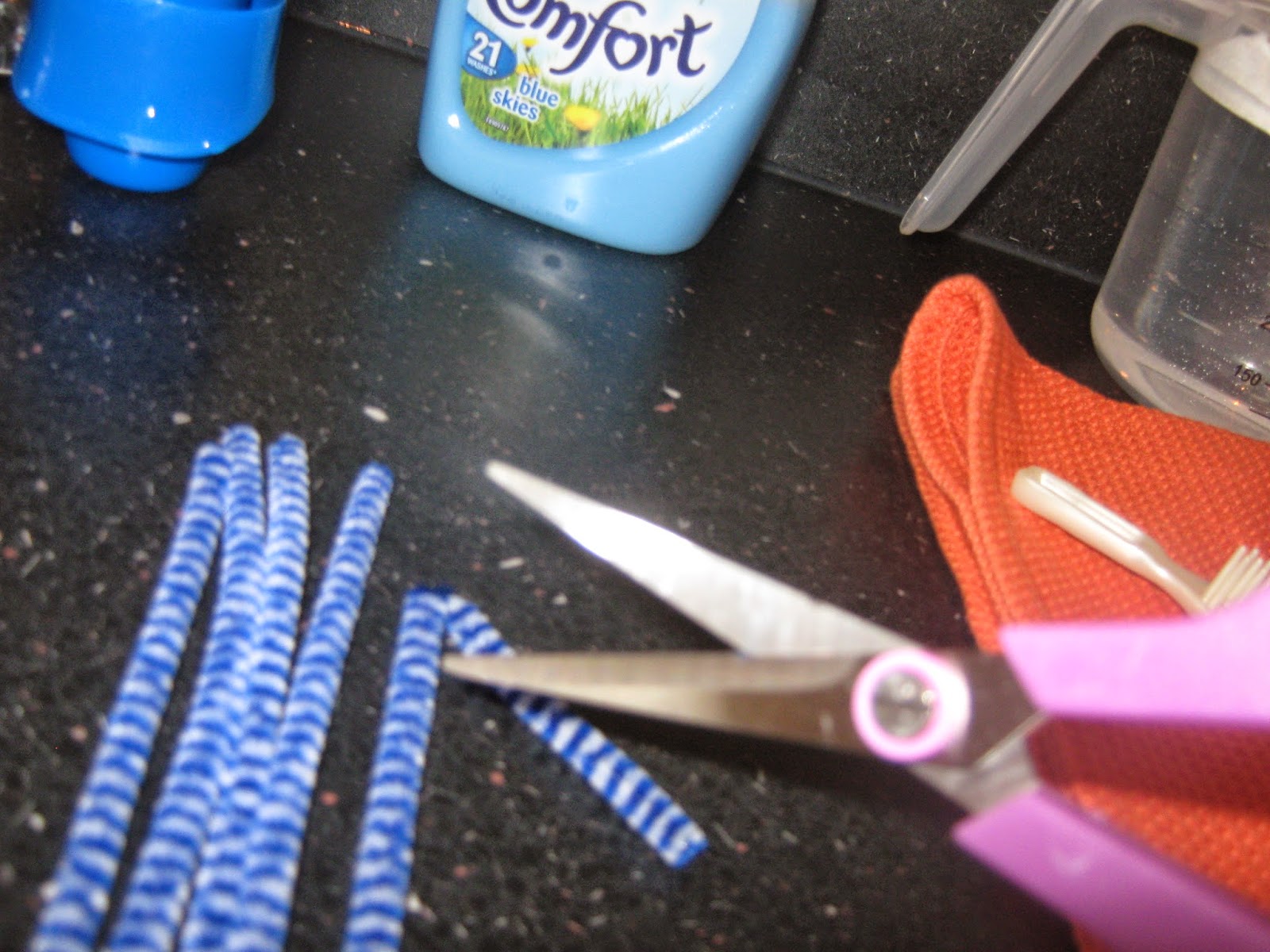 I then cut up my pipe cleaners into usable 'perming rods' - about 2.5 inches, and then began to wind the sections of hair around them, section by section.Eventually, my end result once all the sections were done was the supremely inelegant 'argh, stripy worms are attacking my head!' look with all curlers firmly wrapped in Belle's hair.

I  felt awful doing the boil perm! I didn't photograph it, as I felt a bit like Sid from Toy Story, torturing small plastic things for amusement - and it was the most nerve-wracking part of the whole process.What if Belle's head melted off? what if the hair dissolved? I'd never done it before, and though I'll probably re-style ringlets again, it's not something I'm comfortable doing.
I took a small jug of boiling water, and completely submerged Belle's head for exactly 1 minute.I timed this exactly as I was so worried about getting it wrong. But everything was okay, luckily. Once this was done, I retrieved Belle and gently poured cold water over her head so the style was set. Once I'd done this, I gently patted dry her curled hair with a towel before removing the pipe cleaners. 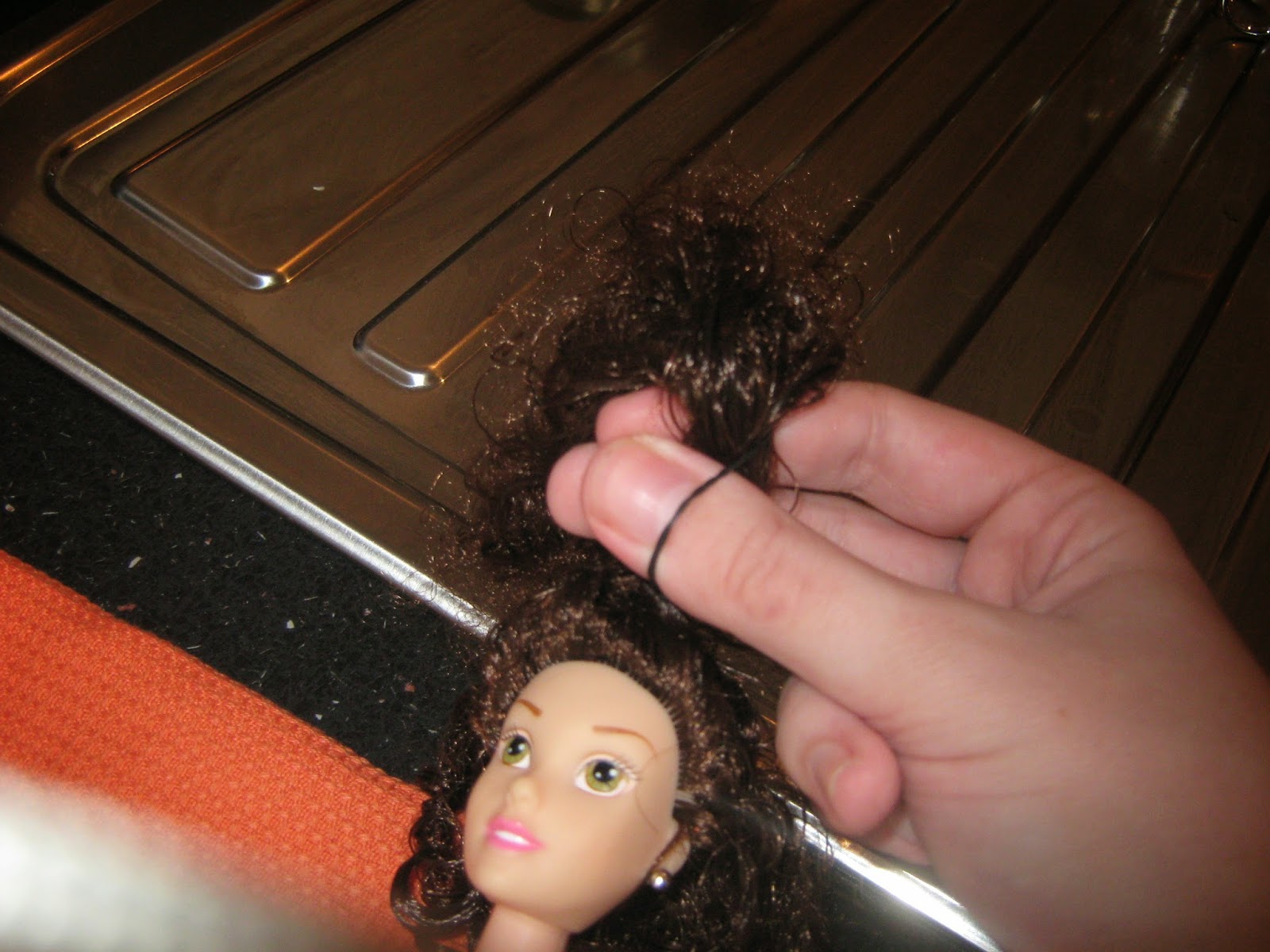 I left the style to dry in its ringlets overnight, before adding the finishing touch, using the elastic bands to pull the two sections back and hold them at the back of Belle's head.

So, here's the "before" portion of our hairstyling shoot:

And the 'after' portion - much neater, ringlets going where they should, hair now styled. 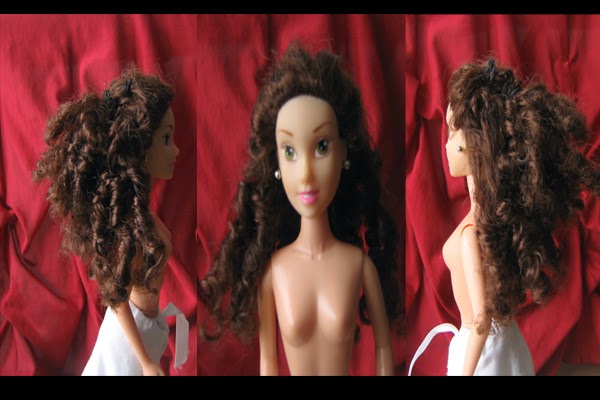 All in all, this was a definite success!


Posted by The Twelve Inch Tailor at 07:55 No comments:

A Christine Doll on A Budget

This was probably the very first item of Barbie clothing I ever tried to make when I was around 14. I’d fallen in love with the Andrew Lloyd Webber musical and the beautiful costume designs by Maria Bjornsen – and it was the first costume collection that I really wanted to replicate on my dolls. I wasn’t aware of the lovely FAO Schwartz 1998 Phantom and Christine Barbie set – but paying around two hundred pounds for them was well beyond my price range at fourteen. Besides, lovely as the wedding gown was, my favourite costume was the divine blue bustle dress worn during the musical number ‘Wishing You Were Somehow Here Again.’ It uses a gorgeous floral blue striped silk fabric, with blue velvet and trimmings galore that make a beautiful ensemble when put together – although from looking at how busy the fabric is, you’d think it could end up a little like a walking sofa! But this was the costume I really wanted.

So with very little knowledge, and mad enthusiasm, I  tried to make this costume at the time . I’m sad I didn’t take any photos of it, just to prove what a bad idea ‘guessing’ how a bustle is constructed is. "Patterns, what are those things for?”I used electric blue nylon lace and scraps of blue stretchy viscose cotton fabric – probably the worst materials ever.
Needless to say, it didn’t look much like anything. But I’ve always wanted to do the actual costume justice – and since I’ve learnt much more about sewing since I was fourteen, I thought I’d finally give this a go and make my very own “Christine on a Budget”. 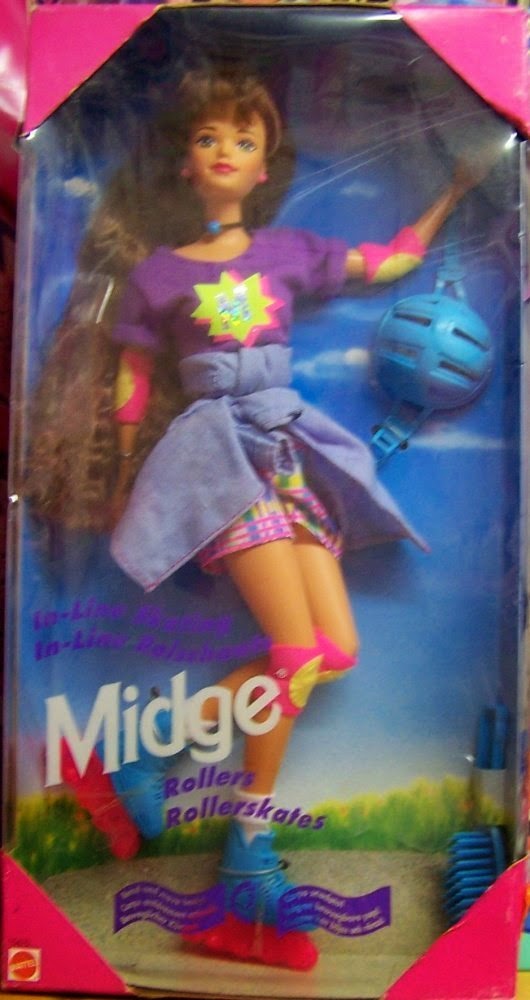 Now, my favourite, most beloved Barbie doll as a child was Midge. She came as an In-Line Skate Midge way back, when all the 'hip' Nineties kids' toys had crimped hair and multi-coloured beads and shorts - but she was a brunette, and I thought she was the most beautiful toy I'd ever seen. I always thought she looked a bit like Jo from Little Women - certainly a romantic heroine! She has a lovely face, and she still stands on my bookshelf - now minus the multi-coloured shorts, awaiting a suitable costume. And she was always Christine in games when I was younger.
And she would have been again, if it weren't for just one thing...
Midge is a poseable flat-foot Barbie. *Sighs* Man, the trouble you have to go to for shoes for those poor dolls! Mattel doesn't seem to have made many shoes for them, on the whole, and the ones that are out there are expensive - so after painstakingly searching the internet, sadly the only shoes I could get for her were these rather punk-style boots: Because of her awkward flat feet, there are very few Victorian boots that will fit Midge.There's a few princess ballet flats out there, but they're very few and far between. So with great regret, I had to put Midge on one side for a future project.

Luckily, I have two young cousins who send their unwanted dolls over to my grandmother's house when they get tired of them - and I managed to find this lovely abandoned Belle over there! 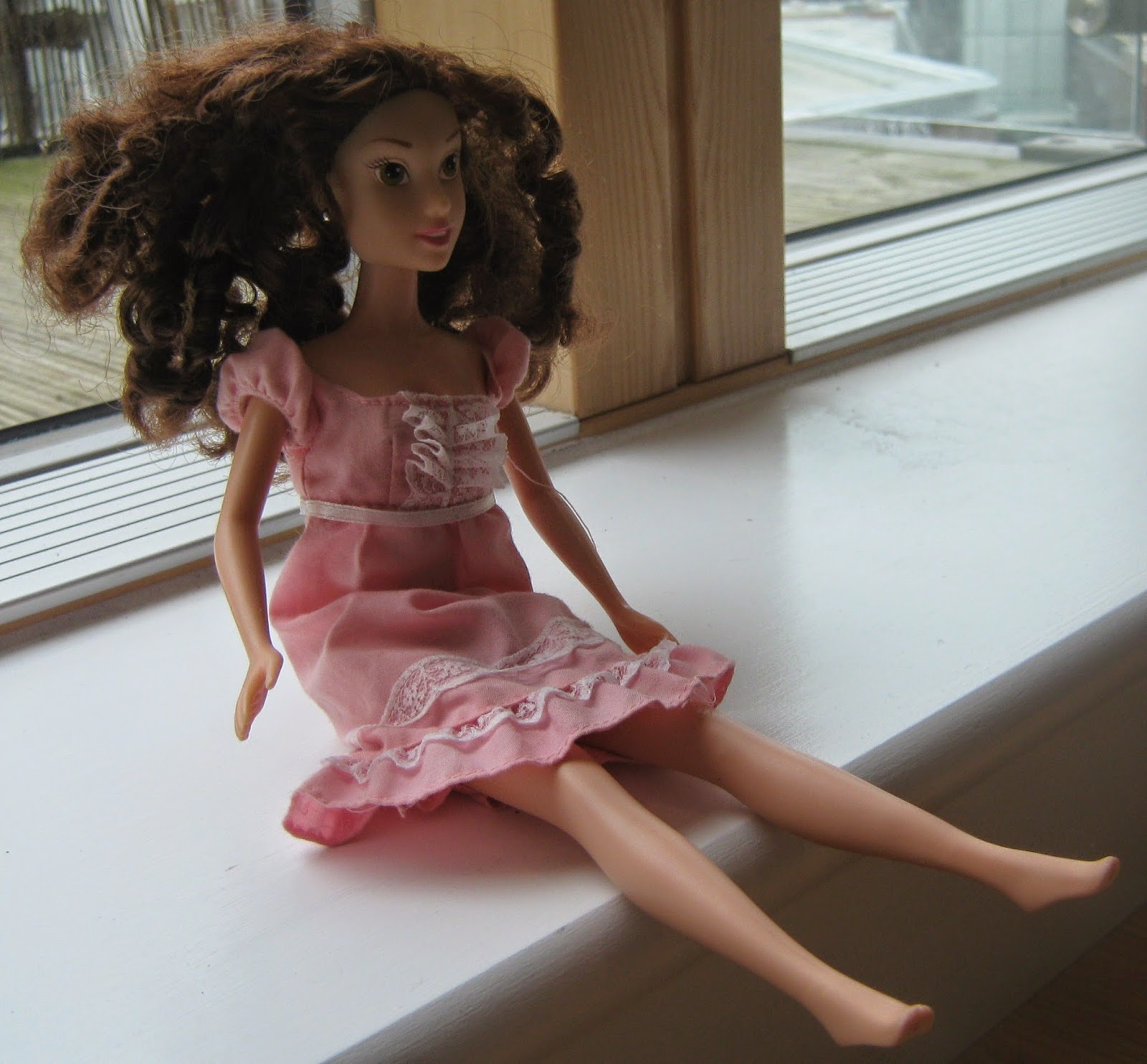 She has a nice face and expression, and part of me loves the idea of making Belle from Beauty and the Beast a Christine - so this was a great find for my project.

Her hair needs restyling - above you can see the dilapidated remains of my first attempt at ringlets for her. After months of sewing and being tossed this way and that as I fit clothes on her, Belle's gone a little crazy. I'll re-style her hair once her gown is finished.

Posted by The Twelve Inch Tailor at 05:53 No comments: 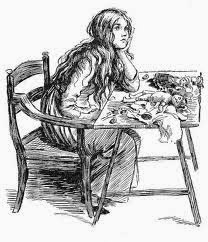 Back when I was a dreamy young tween, I began a lifelong addiction to period dramas. History in petticoats was and is absolutely my thing. From the very first time my mum put on our wobbly home video copy of 1993’s Pride and Prejudice, I have been a self-avowed historical “costume nerd”, and often used to act out intense historical melodramas with my beloved, somewhat scruffy Barbie dolls. There was only one thing spoiling my games, and that was the clothes my dolls were wearing!

It was a little hard to re-enact the execution of Mary Queen of Scots with lamé strapless ball gowns and tie-dye hotpants, which made up most of my doll’s wardrobe as a child of the Nineties – and my lack of clothing for guys meant my single solitary Ken used to end up playing the romantic lead in a pink t-shirt and the aforesaid hotpants – a sad thing for any Victorian hero!

After several years of intense costume enthusiasm and volunteering in my local theatre’s wardrobe department for six years, I finally developed my sewing skills enough to get up the confidence to remedy this situation. Modern clothes no more!  Rescuing some of my old Barbie favourites, I’ve determined to keep my hand in with sewing and historical costume research by finally using my skills to make the fantastic costumes I always dreamed about as a child – as the Twelve Inch Tailor. This blog will be a costume diary of my projects and a place to record the things I learn along the way.

Posted by The Twelve Inch Tailor at 14:44 No comments:

The Twelve Inch Tailor
United Kingdom
Just the crafty ramblings of a 25 year old interested in history, fashion, musicals and everything in between! This is my online record of my various craft projects and sewing skills - mostly pictures galore and a step by step recording of my process.